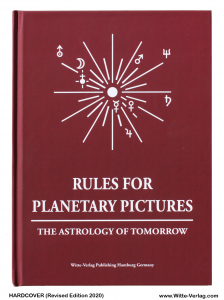 In 1946 the history of the 2nd rulebook period began. Hermann Lefeldt took over the task to integrate Pluto and the four transneptunian planets by Friedrich Sieggrün into the rulebook which double the number of combinations in the book. It was the rebirth of astrology in Germany after the ban, but a new English edition was still far away.

Ludwig Rudolph commissioned Curt Knupfer to translate the book, which was published in 1974. An edition that remained nearly unchanged for almost 50 years. So it was time for a revision. While I was working on the revised English compilation, I noticed that some changes could make the content more usable. The structure of the book contains repetitions of two-factor combinations for practical reasons. Unfortunately, structural two-factor repetitions were reproduced often without the same interpretation texts in the book. In short, the former rulebook had contained more information about two-factor combinations than was assumed. However, this information was spread over several pages.

For the current compilation, I’ve merged several connected interpretations together. The repetitions of two-factors combinations appear on different pages with the same text now. Repetitions of this kind may seem superfluous, but you will find that repetitions make the book much easier to work with. There are further changes compared to previous editions. The former introductory section is no longer included in the English edition. The previous text was compiled in a hurry and a lot of the information given in the wider-ranging German introduction was missing. The new introductory section gives a more comprehensive outline of the Uranian System of Astrology. The sorting of the set of rules has been slightly changed to adapt it to a more contemporary structure. Some translations have been improved and some interpretations adapted to modern conditions. In addition, some ratings of Friedrich Sieggrün’s transneptunians have been adjusted somewhat more closely to his original specifications.

The Witte-Verlag publishing house has for many decades been committed to promoting the authentic and contemporary dissemination of Uranian Astrology. As a descendant of Ludwig Rudolph and the exclusive holder of all rights, I am committed to this tradition. In the revised compilation, a restructuring has been carried out which Ludwig Rudolph would welcome, because the structure of the planetary pictures has been preserved. Despite my adaptations, the texts are still based on the ideas of Alfred Witte and the original work of Ludwig Rudolph as well as on the supplementary work of Hermann Lefeldt.